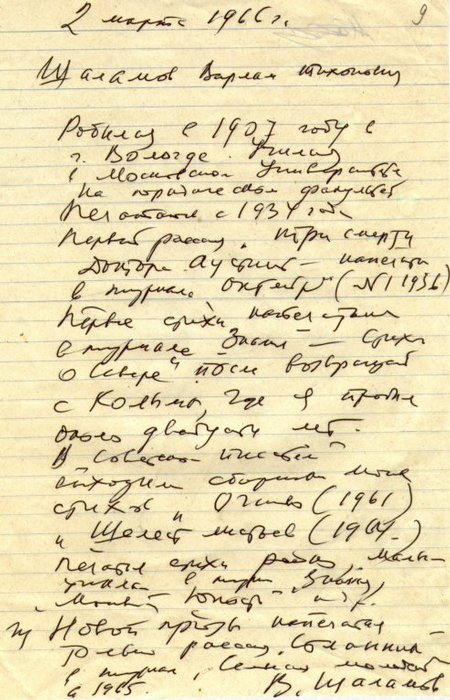 June 18, 1907 — Varlaam (Varlam) was born in the family of an Orthodox priest Tikhon Nikolayevich Shalamov and his wife Nadezhda Alexandrovna.

1923 — Graduates from Uniform Labour School N6, situated in the same building as the former gymnasium.

1924 — Leaves Vologda and finds a job of a tanner at a leather factory in Kuntsevo which at the time wasn’t part of Moscow.

1926 — Through a referral from the factory becomes a first-year student of Moscow Textile Institute and at the same time is accepted into the department of Soviet Law at Moscow State University through open competition. He chooses MSU.

1927 (November 7) — Takes part in the demonstration on the tenth anniversary of the October revolution, with slogans “Down with Stalin!” and “Carry out Lenin’s Testament!”

February 19, 1929 — Arrested in the course of a raid at the underground print shop caught in the process of printing leaflets headlined “Lenin’s Testament”. Sentenced to three years of labour camp as a “socially dangerous element”.

April 13, 1929 — When released from Butyrskaya Prison, is convoyed to the town of Vishera (North Urals). Works at the construction site of the chemical plant in Berezniki under the supervision of E.P. Berzin, would-be head of Kolyma Dalstroy. There, at the camp Shalamov meets Galina Ignatievna Gudz, his future first wife.

October 1931 — Released from the labour camp and rehabilitated. Earns money to pay his way back home from Berezniki chemical plant.

1932 — Returns to Moscow and starts working as a journalist in trade-union magazines Za Udarnichestvo and Za Ovladeniye Tehnikoi. Is seeing G. I. Gudz.

1936 — His first short story “The three deaths of Doctor Austino” is published in the first issue of Octiabr (October) magazine.

January 13, 1937 — Arrested for counterrevolutionary Trotskyist activities and again put into Butyrskaya prison. Is sentenced by the special council to 5 years of corrective labour camp.

August 14, 1937 — Together with a big group of convicts is brought by a steamship to Nagaevo Bay (Magadan).

December 1938 — April 1939 — Is kept in the typhoid quarantine of Magadan transit prison.

April 1939 — August 1940 — Works with a geological exploration crew at “Chernaya Rechka” mine, as a spademan, boiler, topographic surveyor’s assistant.

May 1943 — Is arrested on the accusation concocted by inmates for “anti-Soviet propaganda” and for praising I.A. Bunin as a great Russian writer.

June 22, 1943 — At the trial in the village of Yagodnoe is sentenced to 10 years of labour camp for anti-Soviet propaganda.

Autumn 1943 — Emaciated and devitalized, in the state of a “dokhodyaga” [camp weakling] he is put in the camp hospital Belichia near the village of Yagodnoe.

Summer 1944 — Is arrested on the same accusation, but this time gets no new term as he is already serving penalty under that article.

Summer 1945 — autumn 1945 — In severe condition is kept at the Belichia hospital. With the help of compassionate doctors is saved from terminal state. Temporally stays at the hospital to be employed as a cultural worker and odd-job man.

Autumn 1945 — Works in the taiga lumbering camp of Kliuch Almaznyi [the Almaznyi Spring]. Unable to meet the quota, he brings himself to run away.

Autumn 1945 — spring 1945 — As a punishment for running away is sent back to the punitive camp mine of Jelgalla as a general labourer.

Spring 1946 — General labour at Susuman mines. Gets hospitalized in Belichia with suspected case of dysentery. After getting better is sent with the help of doctor A.M. Pantiukhov to attend a training course for paramedics held at a camp hospital 23 km from Magadan.

December 1946 — After completing the course is sent to work as a medical assistant to the surgical department of the “Levy Bereg” [Left Bank] Central Prison Hospital. (Debin village, 400 km away from Magadan).

October 13, 1951 — His term of imprisonment is over. For the next two years he is sent by the Dalstroy trust to work as a medical assistant in the villages of Baragon, Kiubiuma, Liriukovan (Oymyakon disctrict, Yakutia). His goal is to earn money to pay his way back home from Kolyma. Continues writing poetry and with the help of doctor E.A. Mamuchashvili, a friend of his, gets his poems sent to Moscow, to B.L. Pasternak, and eventually receives a reply, which marks the beginning of the two poets’ correspondence.

November 13, 1953 — Meets B.L. Pasternak, who introduces him to the writing establishment.

November 29, 1953 — Gets the job of a foreman at the Ozyory-Nekliuev construction department of the Tsentrtorfstroy trust in Kalinin Oblast (the so-called “exile beyond kilometer 101”).

June 23, 1954 — summer 1956 — Works as a supply agent at the Reshetnikov peat enterprise in Kalinin Oblast. Settles down in the village of Turkmen, 15 kilometres off Reshetnikov.

July 18, 1956 — Is declared exonerated from the charges and quits Reshetnikov enterprise.

1957 — Works as a freelance journalist for Moskva magazine. Sees his first poems from Kolymskiye tetradi [Kolyma Notebooks] published in Znamia no.5.

1966 — Gets a divorce from O.S. Nekliudova. Gets acquainted with I.P. Sirotinskaya, who at the time is working at the State Archive of Literature and the Arts.

1966 — 1967 — Compiles a collection of stories called “Voskreshenie listvennitsi” [The Revival of the Larch].

1967 — Sees published a book of poems entitled “Doroga i sudba” [Journey and Destiny].

1972 — Learns about the publication of his Kolyma Tales in the West by the publishing house “Posev”. Writes a letter to Literaturnaia gazeta protesting against unauthorized illegal publications, violating the author’s will and rights. Many fellow-writers take this letter as Shalamov’s renunciation of Kolyma Tales and break their relations with him.

1972 — Sees published a book of his poems called “Moskovskie oblaka” [Moscow Clouds]. Is accepted into the Soviet Writers’ Union.

1977 — Sees published a book of his poems called “Tochka kipeniya” [Boiling Point]. In view of his 70th birthday is awarded with the Order of the Badge of Honour, but doesn’t receive the actual award.

1978 — Kolyma Tales is published in Russian by London publishing house Overseas Publications. Like in the previous case, they are again published without the author’s consent. Shalamov’s health is sharply deteriorating. He starts losing sight and hearing, bouts of Meniere disease accompanied with loss of coordination are becoming more frequent.

1979 — Friends and the Writers’ Union help to put him into an institution for the handicapped.

1980 — Receives the news about having won the French PEN club prize, but the actual award never reaches him.

1980 — 1981 — Suffers a heart attack. In moments of uplift recites poems to A.A. Morozov, a lover of poetry. The latter publishes them in Paris, in Vestnik russkogo khristianskogo dvizheniia [Herald of the Russian Christian Movement].

January 14, 1982 — Following the conclusion of the medical board is transferred to the institution for chronic mental patients.

The biography is compiled by I.P. Sirotinskaia, with additional commentary by V.V. Esipov.

Translated by Maria Desyatova.
In addition to this brief biographical bulletin you can also turn the book by Irina Sirotinskaia “My Friend Varlam Shalamov”.

The copyright to the contents of this site is held either by shalamov.ru or by the individual authors, and none of the material may be used elsewhere without written permission. The copyright to Shalamov’s work is held by Alexander Rigosik. For all enquiries, please contact ed@shlamov.ru.